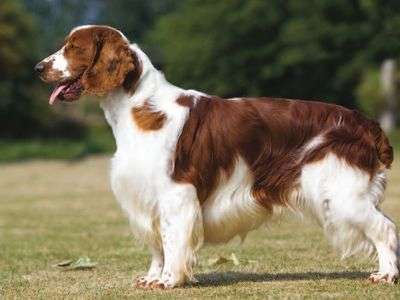 A dog with personality

Welsh springer spaniels are a loyal and loving breed that will develop a strong connection to their owner. Females tend to have a more independent nature which borders on being obstinate. Both male and female dogs, however, have boundless energy, and there is a constant risk of destructive behaviour if they are not kept exercised and stimulated. When hunting they can become a little too engrossed and wander too far; this is best stopped through early training. They require calm but authoritative leadership, since the hunting instinct is never far from the forefront of their minds.

The Welsh springer spaniel is closely related to both the English Springer and the Cocker Spaniel, originally all considered as part of the same breed. Its original purpose was to find and spring at game. It has a great deal of stamina and is able to hunt for extended periods of time through all types of terrain and weather. The Welsh springer was separated from the breed in the late 1800s. The breed was accepted by the kennel club in 1902. There are no breed specific restrictions in place at this time. However, only assured breeders should be used to ensure the health of the dog.

The Welsh springer spaniel is easily recognized by its coat. The white colouring is interspersed with patches of chestnut red. The breed standard also allows for flecks of chestnut to be present over the nose, the bottom of the front legs and on a similar area of the back legs. Full grown males should measure 48 cm / 19 inches at the withers and weigh between 35 and 40 lbs. Females are slightly smaller and measure approximately 46 cm / 18 inches and are expected to be at the lower end of the weight scale.

Welsh springer spaniels need to run. It is essential to their physical and mental wellbeing that they have time and space to run free, in addition to daily walks on a leash. Walks need take at least an hour.

To maintain their coats the in good order, Welsh springer spaniels need to be brushed daily. Frequent bathing is also a must if the dog is running through woodland or undergrowth. The hair between the toes should be kept short to minimize the risk of infection. Excess hair on the ends of the ears can also be trimmed with no ill effects. Ears should regularly be checked for grass seeds, tics and any signs of infection.

Care needs to be taken with the type of ground that the dog is running through as they are prone to hip dysplasia. Other ailments common to the breed are epilepsy and entropion. Dogs that do not receive enough exercise will be prone to excessive weight gain as well as developing behavioural problems.

Training requires a consistent approach; short, but regular intervals of training are most effective. Calm authority will produce good results; however, harsh discipline will be particularly detrimental to this breed. Early socialization is a must to combat their tendency to be reserved with strangers.