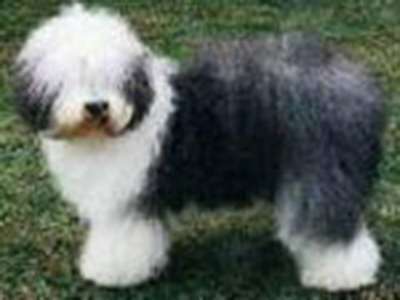 The OES stands at over 61cms (24 inches) for a dog and 56cms (22 inches) for a bitch. It has a sturdy frame, with a solid muscular bearing and confident rolling gait. The back slopes towards the withers. The head is quite large, with a well-defined square muzzle that measures less than half the length of the head. The eyes should be dark with pigmented rims, although blue-eyed examples can be found, and the small ears should lay flat along the head. The mouth should be strong and teeth regularly spaced.

The OES used to have its tail docked, but because this practice is now banned in several European countries, the tail should now be well covered in fur and not curl over the back.

Of course, the hallmark of the OES breed is its abundant coat, which is thick, rough and shaggy. In fact, the coat consists of two layers: a long outer coat and a dense lower layer which is waterproof. If the dog is intended for showing, then the coat should not be clipped in any way, except perhaps around the anus for hygiene reasons.

The OES is known for its steady temperament. It is loyal, dependable, and is generally not prone to nervousness. This makes it ideal for a family pet, but its lively and intelligent disposition also makes it very suitable as a show dog.

One of the most important considerations when caring for an OES is to ensure that regular and thorough grooming is carried out. This involves careful brushing through all the layers of hair, so that there are not knots, tangles or matting which could cause health problems in the future. Occasional professional grooming is also recommended. If the owner does not intend to show the dog, then having the fur trimmed or clipped may make the task of grooming easier and also prevent the dog from getting overheated during warm weather. The colour of the coat can include white, grey or blue, with the darker colours present on the body and hindquarters, and the head, neck, belly and forequarters white.

Due to its heritage as a working dog, the OES needs at least 60 minutes of exercise in order to stay fit and healthy, and also benefits from regular stimulation at home such as play sessions and toys to amuse it.

The OES can suffer from hereditary or other health conditions. Cerebellar Abiotrophy is a disease which causes loss of muscle co-ordination. Whilst not painful, it is important that breeders ensure their dogs are free from this condition through genetic testing, as a dog or bitch can be a carrier without exhibiting symptoms. Other conditions which can affect the OES include: Primary Ciliary Dyskinesia, canine hip dysplasia, elbow dysplasia, slipping knee-cap, popping hock, and separation of joint cartilage. Regular check-ups should be an essential part of the healthcare regime.

The friendly outgoing nature of the OES, together with its fabulous appearance, makes this breed a wonderful option for the dog owner looking for a show dog or for the family seeking a lovable pet.