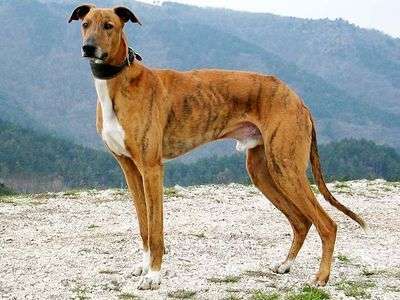 The Magyar Agar is an original hunting breed. Its origin can be traced back to the time of the conquest of the country by the Magyars. The skull bones found during excavations are proof of that. To increase his speed the breed has been crossbred with different greyhound breeds during the 19th century.

Various greyhound races have contributed to the emergence of the Magyar Agar. Oriental greyhound races came during the Great Migration from the 4th to the 6th century in today’s Hungary. They were brought by the Huns. In the year 890 the Magyars, a warlike folk of horsemen from the Urals, were falling into the region. They probably brought with them Borzois, a greyhound race, which is in today’s Russia still widespread. These animals were bred in the existing greyhounds. In this way, the Hungarian Greyhound was created as a new breed. This new breed has been used for centuries mainly by the nobility for hunting. Greyhounds from England were imported about 1900. These animals should refine the Hungarian breed. The Magyar Agar was approved up in 1966. In breeding nowadays the difference to the Greyhound should be emphasized.

The Magyar Agar is a hardy dog of strong body type and strong bones. His muscles are developed dry and well marked. The hair is short and dense, somewhat coarser than that of the other short-haired greyhound races. Male dogs are between 65 to 70 centimeters tall, femals are slightly smaller. The dogs are very lightweight compared to their size. They are having a weight of about 25 kilograms. The Magyar Agar has a very elegant appearance with pleasant proportions. Its body is longer than the dog is tall. The straight limbs are strong and sinewy. Its walk is ground covering and elastic. The following colors are permitted: white, yellow, black, monochrome, blotched or spotted. Basically all known colors and color combinations of the other greyhound breeds are allowed with the exception of brown, blue, blue and white, black and tan and tri-color.

The Magyar Agar is one of the watchful greyhounds who defend their homes vigorously. It is closely connected to his family and is calm and pleasant in the house. It is quite is reserved and self-confident towards strangers. His proud character needs a sensitive education. His sense of smell is developed less well. That’s why it is a pure visual hunter. On the race track or coursing it should be able to fulfill its immense strength and its enormous urge to move. Then it is balanced appropriately and should be able to show his kind and gentle nature. The Magyar Agar has a strong hunting instinct. Therefore freerunning in nature always involves a risk. He is not a dog for beginners. Owners should have some experience in dealing with greyhounds.

The Magyar Agar is sturdy and strong. His short hair is slightly coarser as that of the other short-haired greyhound races. The care of the fur is easy; it is sufficient to brush the hair regularly. Brushing stimulates blood circulation and promotes the well-being of the animal. His fur is very short in the summer, but slightly thicker in winter. It must be brushed more often during the cold season. The Magyar Agar is hardy and therefore impervious to weathering. Because of its resistance it is also slightly susceptible to injury.