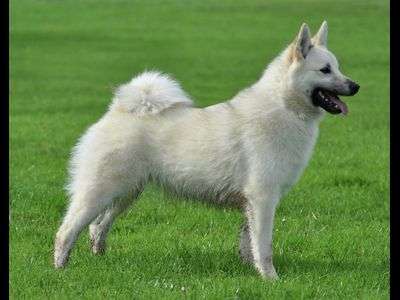 The lineage of the Norwegian Buhund can be traced back to the Vikings, who bred them on the coast of Norway from other similar dogs and used them for farm herding. They are small in size like other Nordic snowdogs, and have what can only be described as a square profile. Similar to other dogs in the "snow dog" group of breeds, the Buhund has a tightly curled tail that sits along the centre of the dog's back. The nose is black, and the ears are pricked. A deep chest is also typical of this breed, and in many respects they could be described as a miniature version of a Siberian Husky or Malamute but with more plain markings.
The Buhund tends to be light in colour, with either a light orange or wheaten colour being the most common.
In terms of temperament, the Norwegian Buhund strikes a balance between working dog and beloved family pooch. Like many of the larger snow dogs, they run at a high energy level due to their instinct as working animals, and as such, they require a high amount of exercise. Similarly, they have a strong desire to learn and be constantly stimulated. Because of this high energy, and the fact it needs to be burned off daily, this breed can easily become bored, and when this happens, they often become destructive. Damage to furniture is common when these dogs aren't given attention and exercise, and in extreme cases they have been known to even chew plaster out of internal walls.
However, with their high energy levels in mind, they are also very loving pets. They love children, and will be very playful with them, but due to their excitable nature, it is advisable to supervise them. Snow dogs can be very aloof due to their working dog nature; however, the smaller stature of the Buhund means that they appreciate the relationship between dog and master, and they love nothing more than to lick and cuddle with their owners. Once a bond has been established, the Buhund is known to form an intensely close bond with its master, acting as a protector and making them natural watch dogs through the ages. Because of this, they can be wary around strangers but will not bite or attack unless provoked, despite having a tendency to bark in situations where they meet strangers around their owners.
Overall, the Buhund is not an ideal breed for someone looking for a low maintenance dog. They require regular daily exercise, and their energy needs to be actively used up (not an easy task as they can continue to run and play for a long period of time!) but the rewards of owning a Buhund are immeasurable. They are full of love, and when docile and stimulated, they are a beautiful and joyful addition to any family.