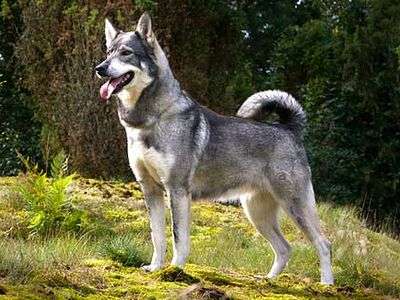 The Jamthund comes from the north of Sweden and has been used there to hunt elk, lynx and bears since the earliest times. It is claimed to be one of the oldest dogs known to man, dating back to the last ice age. It was once assumed to be the same breed as the Norwegian Elkhound but was recognised as a separate breed in 1946. The Jamthund has a life expectancy of 12-13 years.

A male Jamthund should stand 22-26” tall and a female 20-24”, with a weight of around 22.7-29.5 kg. It has a rectangular body that should not be too long or too heavy, with a deep chest, a strong neck and well-sprung ribs. The breed has a distinctive gait when running as it places its paws in a single, central line; this has been developed over time to enable it to run easily in the snow by allowing the hind legs to move into space already cleared by the front legs. The legs are thick-boned but long and the toes are tightly knit. The Jamthund has a long, wolf-like head, with a tapered muzzle, a straight, broad nose and small, dark brown eyes. The triangular, pointed ears are held erect and should not fold or flop over.

The Jamthund has a double coat, with a soft undercoat and a longer topcoat that lies close but not flat to the body. The colour should be dark or light grey with cream or light grey markings on the throat, cheeks, sides of muzzle, chest, belly, legs and under the tail. The light markings must not be missing or overlaid with black. The tail is very distinctive, and should curve over in a scimitar shape and be loosely curled without twisting. The tail has thick fur of medium length. The thickness of the coat make them unsuitable for hot climates and they do tend to shed profusely.

The Jamthund has all the qualities to make it a perfect hunting dog, including courage, energy and perseverance. It is certainly not suitable as an indoor companion pet, though its calm nature makes it good as a family dog. It does need a lot of strenuous exercise, preferably in a safely enclosed area, and will relish any hunting or chasing games. While they are loyal and protective, they are also very strong-willed and independent and do best with a confident and dominant owner. Consistent training will keep them on the right track and prevent them being obstinate or stubborn.
The Jamthund is a very vocal dog and it makes a great guard dog. It will rarely bite but prefers to bark loudly at unwanted visitors. It is not too fond of other dogs, particularly strange ones, and can be aggressive towards them if not carefully supervised. Its strong prey instinct also means that it is not advisable to let it loose around cats or other small pets. A Jamthund is very intelligent and will learn quickly, however, so should do well if socialised early. Their thick coats make daily grooming a necessity although they should not be bathed too often as it can damage the weather-proofing of their coats.