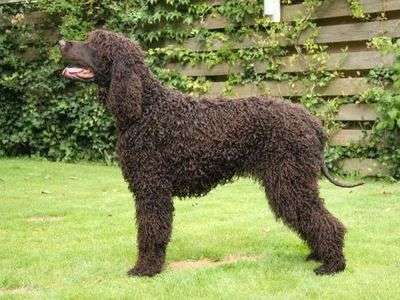 The history of the Irish Water Spaniel

Although the modern breed was categorised and developed well before the end of the 19th century, its origins are probably hundreds of years older. In this case, the name is no misnomer: the breed has its own dog club in Ireland and is still to be seen there, and its origins are also reflected in the nickname ‘Bog Dog’. Other attempts to trace its beginnings have followed the trail to southern Ireland, where the name ‘Shannon Spaniel’ would seem to lead. Wherever their true home lies, they certainly have a natural affinity with water, and well-trained animals spring eagerly into the chilliest ponds and meres to fetch waterfowl. They are ‘soft mouthed’, making them ideal retrievers of game.

Apart from dog breeders, this variety is well known to fans of the writer P.G. Wodehouse. One short story revolves around an attempt to find the Irish Water Spaniel that one of the characters believes will be the perfect surprise Christmas present for his would-be sweetheart, ‘the Dog Girl’. As it turns out, the search for the elusive dog provides the twist in the comic tale.

The Irish Water Spaniel at its best

Typically blessed with a buoyant personality, Irish Water Spaniels are inherently eager to please. They trot along happily at heel and are quick to grasp the dynamics of the working relationship. For the most part, this simply reflects their natural intelligence, curiosity and all-round astute demeanour.

It is crucial to get them trained up early, and variety and a strong play element are essential – again, a reflection of their intelligence and need for stimulating activities, beyond simple exercise.

At their best, the fastest and most active examples of the breed excel at agility tests, obedience and field trials. Although popular as gun dogs, their reputation as the huntsman’s friend overlooks their natural adaptability. They are sometimes observed to be unwelcoming to strangers and do not always mix well with other dogs, although this is perhaps only the flipside of their obedience and dedication to their master or mistress.

One stroke of an Irish Water Spaniel explains why they are so well suited to their traditional aquatic habits! A naturally water-repellent double coat is made up of close, lapping curls. A topknot of ringlets can hang down almost over the eyes, while the ears resemble a 17th century gentleman’s wig. They need regular combing, but they shed very little – a characteristic which makes them popular with owners whose allergies would otherwise prevent them from keeping a dog.

Solid in their build, the spaniel is typically around 58cm in height, and when fully grown will weigh between 25 and 30kg.