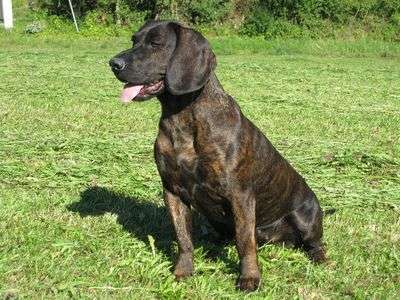 Hanoverian Scenthounds are medium-sized animals with a proportionate body and a weight of between 36 and 44 kilograms (80 to 99 pounds). It is a pure breed and falls under the hounding classification. While originally designed as a hunting and tracking companion, Hanoverian Scenthounds are also able to accommodate other roles. They can be used as formidable guard dogs and can accompany joggers. They require a moderate amount of exercise to remain healthy and the average life expectancy is between 10 and 14 years. These hounds are capable of adapting to both warm and cold climates. As this is an uncommon breed, such dogs are quite rare in terms of ownership.

As this hound was specifically bred to track game, it can often exhibit a rather single-minded quality. Due to heightened olfactory processes, it will sniff out game (and other animals) from a great distance away. This could prove to be frustrating if the dog is not trained properly; it may very well run off when distracted. Arising from the fact that the Hanoverian Scenthound requires a great deal of physical stimulation, it is generally not suited for apartment living. However, those who own a home with a garden or reside in rural locations will be able to accommodate these needs.
This dog is loyal and loving. It will show a great deal of affection towards family members. Thanks to its high activity level, it is also excellent with children. Although calm with close family, the Hanoverian Scenthound has been known to be discriminating with strangers or new family additions. Another notable personality trait is that it is extremely confident while simultaneously showing obedience to its master. However, training needs to begin at an early age. This breed can be very willful as it grows.

Hanoverian Scenthounds are known for their thick and short coat. The fur is particularly rough on the back of the legs and underneath the tail. Colours range from light shades to dark red. While not common, smaller white patches on the chest may also be present. Large and floppy ears allow the face of this breed to slightly resemble that of a dachshund. The brow can be furrowed due to underlying folds of skin and this dog is quite animated in terms of facial expressions. Only light grooming is required due to the relatively short coat. If exercised properly, Hanoverian Scenthounds will boast muscular bodies; especially in the chest area and hind legs.

As mentioned previously, physical training needs to begin at a very young age. Both patience and positive reinforcement should be employed as this variety will not respond well to harsher methods. Due to its nature to track, a pronounced emphasis must be placed upon commands such as sitting, staying and heeling. This is important for those living within suburban areas. Generally, this pure breed will rank high in shows if the colour is uniform and a dark brown, chocolate or deep red. Although white spots on the chest may detract from the overall score, they are still considered to be acceptable.