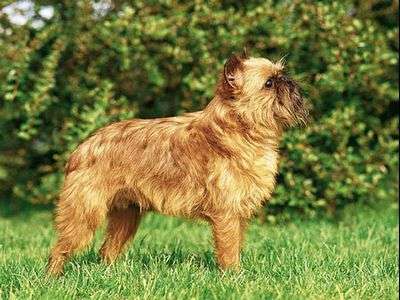 This dog is a descendant of an old type of dog known as Smousje, a small, rough-coated terrier-like dog that is similar to the Dutch Smoushond. Other breeds such as the English toy spaniel, Irish terrier, and the Yorkshire terrier have also been attributed to this breed. The first Griffon Bruxellois was exported to the United States in 1945.

The Griffon Bruxellois is intelligent, cheerful, charming, and lively. In addition, it is loyal to its owner and affectionate with members of the family. It displays a visible air of self importance and is constantly alert and interested in its surrounding. As long as it is not teased or intimidated, it blends well with children. It also gets along well with other pets in the house, including ferrets, cats, and other dogs. However, it may get into trouble once in a while because it has no concept of its own small size and may try to dominate bigger dogs.

To prevent this dog from displaying dominance and developing unpleasant behaviours, it is important to train and socialise it when still young. With adequate training, it will not only behave well, but will also accept its place in the pecking order. It will also know when to and not to bark.

As far as exercising goes, the Griffon Bruxellois loves to accompany its owner for long or short walks. It also enjoys playing and running around gardens, meaning that it is ideally suited for homes with gardens or great outdoors. If you are living a busy lifestyle and cannot exercise the dog adequately as required, you can leave it at your local dog day care whenever you are not around.

The Griffon Bruxellois has a life expectancy of 13 to 15 years and is vulnerable to conditions such as respiratory problems and slipped stifle. The dog should also be tested for congenital defects such as chiari-like malformation (CM) and syringomyelia (SM). Most importantly, the eyes should be checked thoroughly for cataracts, lens luxations, glaucoma, and lacerations.

Due to its confident and dominant nature, the Griffon Bruxellois should be subjected to close supervision when around bigger dogs to avoid unnecessary conflicts. It also needs water and a good supply of healthy foods such as fresh meat and fish. Be sure to watch its diet to prevent overeating and obesity.

The rough coat requires a lot of attention and care. To keep it clean and neat, brush it thoroughly with a stiff bristle brush or a slicker brush. It should also be stripped out at least once or twice a year when it moults.

For the soft coat, brush it with a brittle brush and shampoo only when necessary. Veterinarians recommend that the coat should be groomed at least twice a day to keep it free from food particles, mud, and anything else that might get stuck on it.