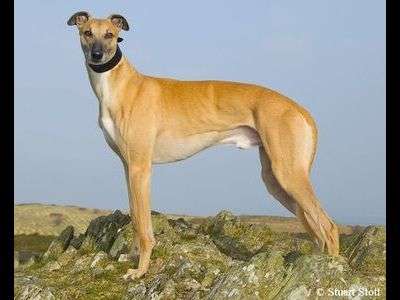 The greyhound must have small, dry, high and rather to the back showing rose ears and powerful, strong and correct teeth. The trunk shows a well developed chest and good ribbed vault. The back ist relatively long, wide and full of strong muscles. The underline should be very curvy. The Greyhound stands on long, strong legs that are at the right angle. The tail is long, thin and deep. In the beginning thicker, it becomes younger to the end, slightly hanging down, in action up, but never higher than the back. The Greyhound's hair is fine, thick and well cut in every colour and colour combination. Its nature is balanced, but alert and able to defend itself and its owner.The greyhound can be seen as descendant of the Celtic Greyhound which came to England with the Celts during their wars in the 4th century BC. Juliana Berner, priory of the monastery of Sopwell, describes the Greyhound of her time in the following manner: "The Greyhound's head should look similar to a snake, as a dragon throat should look its throat, the paws should be like those of cats and the back should be long and well curved."For hunting of wolves the Englishmen had the Irish Wolfhound or the Deerhound, for hunting rabbits they used smaller and lighter Gagehounds. These has been crossed with the English Bulldog and Bull Terrier, to give more power and strength to the race. The triumphal march of the Greyhound started in 1561 with the rising of the dog races. In the year 1776 the Coursing Club in Swaffham was established. In the United Kingdom of Northern Ireland and Great Britain there is a distinction between three breeds, the Racing Grey, the Coursing Grey and the Show Grey. The last one is bigger and in the proportion very different. The Racing Grey is a compact dog full of muscles, the Show Grey very delicate.The greatest achievement of a Greyhound is 61 km/h. Although a Greyhound can be a good companion, it should not be degraded to a pure flat dog. For children a Greyhound is not appropriated, because its temper is lacking self-control.