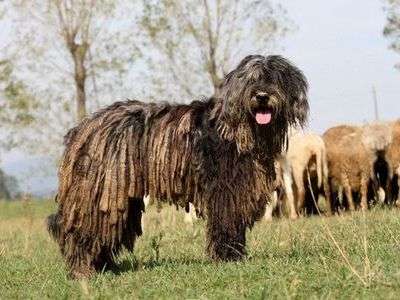 In addition to its distinctive coat, the Bergamasco's temperament is highly regarded and has been created by extremely selective breeding. While it is described as "strong and brave", it is also a calm and steady dog, and has an extraordinary connection with children, demonstrating patience and tolerance. They are known to develop a deep attachment to their homes and human families, as well as their puppies, and make excellent watchdogs, while not showing any aggressiveness unless a serious threat is perceived. They seem to have an uncanny ability to sense whether a stranger is trustworthy or not, and will have a distinct reaction to everyone they meet. This breed does best with a firm, but not harsh owner, one who shows consistency in applying rules.

Males should measure 60 cm with a leeway of 2cm higher or lower; females 56 cm. The male Bergamasco should weight 32 - 38 kg with the female being significantly lighter at 26 - 32 kg.

The Bergamasco Shepherd is a medium-sized dog; body type should be square and compact, with a powerful build, but not so much that it takes away from his speed and agility. The skull should be broad, and teeth should meet in a scissors bite. The eyes should be dark brown, and the lips well-pigmented. Due to its dense coat, this breed is happiest in a cold or at least a seasonal climate. They prefer to spend their time outdoors, often sleeping outside as well. They need room to run - preferably with enough room for them to exercise on their own - but they definitely need plenty of daily exercise, if only a good long off-leash romp.

The Bergamasco's coat is unusual in that it is constantly changing, from puppyhood to the adult coat, which begins to develop at about 8 months. The coat begins to form cords, or flocks, which will continue to grow and change throughout the dog's life. At about five years of age, the coat will grow long enough to touch the ground. In spite of its complex appearance, the coat takes care of itself, and requires little grooming. There are three distinct layers in the Bergamasco's coat: the undercoat, which is fine and forms an oily waterproof layer; the "goat hair", which is long and harsh like a goat's; and a fine, woolly outer mantle. These layers gradually wind around each other, creating the flocks, and providing a weather-proof coat that keeps the dog comfortable in the harshest of climate conditions.While the Bergamasco Shepherd is not a breed for everyone, they can be a wonderful addition to the right family. As long as they are provided with the proper conditions in which to flourish, they will live a long and productive life, often up to 15 years, with relatively few health problems.