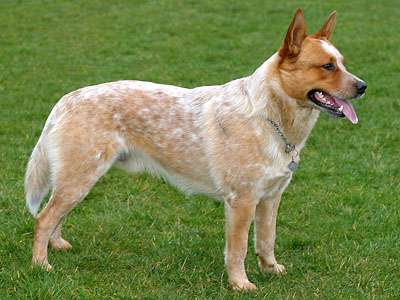 The breed was developed after English cattle-herding dogs were either not suitable to the harsh Australian environment or else didn’t survive the long journey from Europe. Instead, early pioneers crossbred other varieties that better suited the conditions. The exact breeds used are debatable, however it’s been suggested that Blue Merle Collies, black and tan Kelpies, Bull Terriers and even tamed dingoes were used. The Australian Cattle Dog (ACD), which was developed, was well suited for the heat and long distances required in herding cattle in its environment.

As it has been bred to be a working dog, the ACD displays many characteristics of breeds suited to that particular work – intelligence, energy and loyalty. The breed can also bite strangers, especially if the animal has not encountered a great deal of strange people or other dogs in their life. It is also a dog that bonds strongly with its owner and does not like being separated from them.

While the breed has had a great deal of its initial aggressiveness bred out to suit a more domestic environment, the ACD is still a dog better suited to an owner with firm leadership and time to exercise the animal properly.

Since it was initially bred to herd by biting, there can be some issues with the breed biting and nipping. This can cause problems especially around small children running about as they may nip at heels in an attempt to herd the person. This isn’t to say that the breed isn’t suitable for children – many happy families have an ACD in their lives, but care must be taken to ensure that the right temperament is selected and the dog’s training is adequate.

As a working dog, it needs a high level of proper exercise and something to occupy the animal’s mind. It has boundless stamina and energy, as well as a great need for praise from its owner. If it doesn’t get these things, the dog can get bored which can result in a development of a wide array of behaviour problems (barking, digging, etc). Correct upbringing and training as well as a firm owner will provide the animal with excellent boundaries.

There are a variety of exercise activities for the ACD, assuming it doesn’t have a small herd of cattle to work with. Long daily walks, jogging, fetch, tug of war and Frisbee are all ways to exercise this breed and to burn through some of its nearly bottomless energy. In addition to this, exercise for the mind is also required. Time spent revising commands and tricks will work well, as well as dog toys stuffed with treats and other games that encourage the pet to use its mind. Simple rewards and praise go a long way in maintaining a happy and content pet.