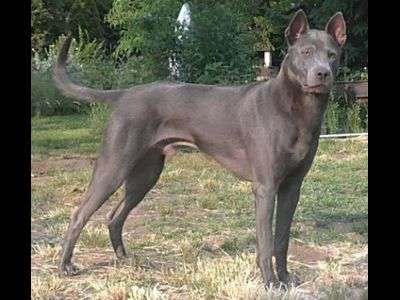 The Ridgeback gets its name from the crest of hair which runs contrary to the rest of its coat and is located down its spine. The crest may have whorls and circles in it. It is a medium sized dog, around 22” at the shoulder, with a short, thin coat and extremely muscular body. Ears are triangular and the tail is carried high in the air. Generally it is recognised that the coat should be a single colour, although most colours are permitted, including fawn, blue, black and red.

These are feisty dogs that have a long history of roaming freely in packs, living off waste from human habitation as well as any carrion or small animals they could find. As most breeding has occurred by natural selection (survival of the fittest), today’s Ridgeback is agile, fit, highly intelligent, independent and has a very dominant character. With the right owner they make a very responsive and loyal pet, but it is crucial that they are paired with someone who understands canine behaviour and can make it clear who is the boss very early on in the relationship. Improper handling or failure to correct attempts at dominant behaviour can lead Ridgebacks to become aggressive and unpleasant. They can also be suspicious of strangers, so early socialisation is vital in minimising the risk of aggressive tendencies later on in life.

Ridgebacks are extremely energetic and need plenty of exercise. A couple of hours a day is often the minimum required to ensure this animal gets sufficient physical and mental stimulation. They also need a secure environment as being naturally excellent jumpers they can easily leap over a low garden fence in order to go exploring. Perhaps due to its Eastern ancestry, this breed has a very thin coat and is prone to suffering when it’s cold weather. This enables them to live quite comfortably in homes where there is central heating and they thrive during the warmer months, but care should be taken that they aren’t left exposed for long periods of time during colder weather. They require little grooming, with an occasional brush and bath normally sufficient for their needs.

Thailand Ridgebacks can be difficult to train due to their independent nature. An experienced handler is needed with enough confidence to calmly assert their dominance. Once the Ridgeback accepts that it is the trainer who is “top dog”, they will respond very well and can be successfully trained not only in obedience, but also to compete in Agility events, where their physique can make them nimble competitors.

The Ridgeback has an undeserved reputation for aggression, largely caused by inappropriate handling and inexperienced ownership. In the right environment and with an assertive owner that understands them, this breed makes an appealing and loyal pet. Generally healthy, with a high intellect and great spirit, this breed has a lot to offer anyone that is prepared to work hard at the dog/human relationship.